Outside of Westminster Crown Court, the circus is in town.

Almost one hundred journalists from TV networks and news agencies around the world gathered like bored school children waiting for the bus. The metropolitan police were also there, guarding the door to the back exit of the court. We were waiting for an opportunity to photograph the face of the beast. The beast is a publisher and journalist, and he is due to leave for Belmarsh Prison.

The beast would be psychologically tortured for his part in the release of documents detailing the illegal activities of the United States Government in Iraq and Afghanistan, a leak regularly compared to the Pentagon Papers, and one that has given newspapers and TV networks material that they did not have courage to find themselves. This is the cruel twist of the capitalist media, I thought to myself, looking at the pigeons waiting for a picture.

Maybe I was jaded. I did not work for an agency after my old one, Demotix, was bought along with Corbis by another photo agency, Getty Images. They used a Chinese subsidiary to buy them out, making the deal effectively secret due to laws in China surrounding privacy in the Stock Exchange.

Most of us did not even need to get fired, we had some cheap press passes and a hand me down camera that kept us reporting during riots, protests and war zones around the world. I was paid almost 50 quid for 550 pictures and a years worth of reporting. I remember when another photojournalist asked me if I was skipping meals and I realised how much I was being abused. Too late, perhaps.

The scene outside of the Westminster Crown Court one year ago looked like a fire drill, and like a drill, nobody cares. Its not a real fire. Assange is not a real journalist, so we will be fine.

The TV news get an interview on the street with someone holding a ‘Police State’ banner. The anchor looks delighted at how easy it is to fill 30 seconds of coverage. The man holding the sign was actually a photojournalist but that fact was not really mentioned. Groups of photographers start running around the building to see if the beast would be shuttled through another, secret exit.

As an investigative journalist I saw an end to my future in the UK. Jullian Assange was evicted from the Ecuadorian Embassy after his Citizenship was revoked and for the first time in seven years, the Metropolitan Police walked onto Ecuadorian soil and forcibly extradited an Australian citizen onto the British pavement and into a waiting van. His face showed exactly what would come next.

“Pain and interrogation occur together” argues psychologist Elaine Scarry. Intense and absolute pain can destroy the core of our lives and we stop existing. It is a substitute for death because at least the sweat release of death is unfelt. Pain mimics death in life, it becomes a mock execution.

“Pain is language destroying.” Scarry continues. “The question becomes the motive, the answer betrayal.” There is no more information Assange can give, the deal is that he betrays his source, Chelsea Manning, who has also been arrested despite being granted clemency in 2016.

Assange would be taken to Belmarsh, a prison with an infamous history of torture and abuse. It is the UK’s very own Guantánamo Bay. Since the arrest, his lawyer has made it clear that Assange is subject to psychological torture, the same torture exposed by Wikileaks was now, predictably, used against the messenger. As journalists we should be demanding to be present at the court hearing and not just be content with a portrait through the window of a van.

What a terrible silence journalism has imposed. This is clearly not about Jullian Assange as much it is about any of us journalists who find themselves at risk of persecution, torture or death for fulfilling our basic duties. In the UK there is an extreme distrust from the British people towards the press, with various reports of Referendum on Europe and Labour election of Jeremy Corbyn, illustrating clearly that the line has been crossed.

Journalism is a form of power. Within that power is a responsibility to hold the powerful the account, an extremely heavy burden and also a hard, highly disciplined graft. If the media cannot be held to account for its actions, it becomes a political weapon for the powerful. If journalists remain silent they are complicit in this organised abuse of the truth.

Be courageous and look death in the eye. If we want to survive we must break the silence.

The following pictures document the court case of Jullian Assange after he was extradited from the Ecuadorian embassy, and the City of London as a photo series on the streets to illustrate the release of the Panama Papers. 11 April 2019 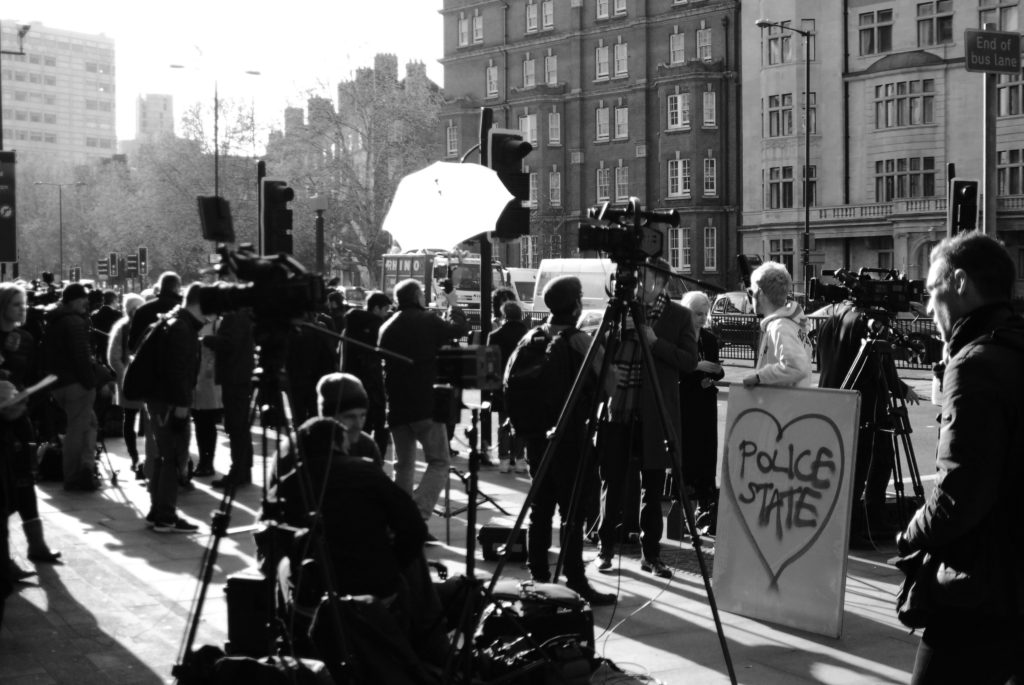 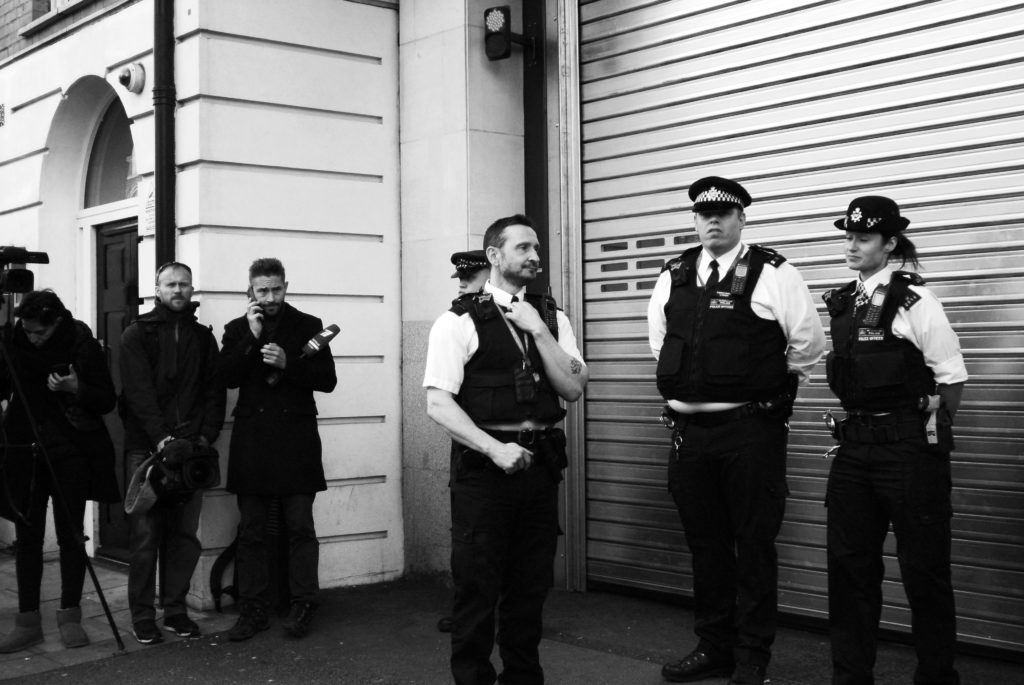